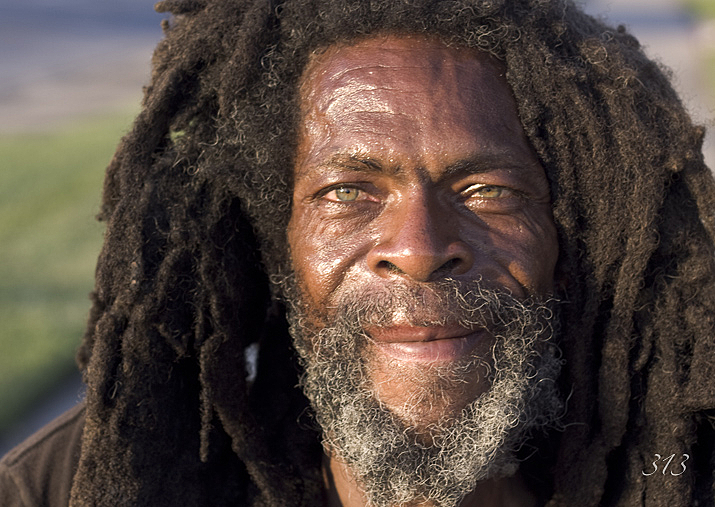 Previous Next
← previous day next day →

Meet Michael, he is perhaps Detroit's most famous pan handler. He's often seen Downtown, near the medical center, or the eastern market area in his wheel chair. Michael lost both his feet due to frostbite years ago. Most people look at Michael but few really see him, or perhaps they would prefer not to see him. He's a really nice and friendly guy and he likes photography and to be photographed. He also understands how compelling he looks and the power of his green eyed gaze.

What a wonderful portrait this is of your friend Michael ... God bless him, and you for reaching out!

Such an unforgettable face and warm soul through your lens Ralph! Delicate and brilliant portraiture!

Michael has a beautiful and almost regal face. I always see the Michaels in my city, and give them eye contact and verbal responses as well as what spare change I may be able to offer on a given day. Frostbite takes a lot of digits from these people. We have volunteer based organizations that actively seek out and implore these unfortunate citizens to get indoors at night during the harsh winter months. I gave a pair of expensive Marmot gloves to a man once who I saw sitting on a subway vent with grotesquely blue fingers... he thanked me profusely and yet only a couple of weeks later he was bare-handed again. When I asked, he told me they had been traded for a bottle of red wine. Such is the harshness and flux of reality for these people who deserve to be seen and listened to. Plenty of them were once me, or you, or others. GREAT portrait and post, Ralph. Bless you, Michael, and good luck.

Wow...those green eyes are very prominent! What a wonderful face full of expression! I hope Michael is watched out for more now since his horrible loss!

What a wonderful image, in so many ways.

A handsome guy. Seems to have a good bit of charisma.

An fantastic ^ortrait , this man is cool!

Ralph, this is a beautiful portrait...such kindness in the eyes....such beautiful detail and clarity....magnificently done! Bravo, bravo, bravo! :)

He has an amazing, a very kind face and striking eyes. It's a beautiful portrait and story.

This is a beautiful portrait. He has amazing eyes. The story of the homeless everywhere is so heartbreaking.

Ralph, this is a great share. Love the comments, too, and just added Rick to my blogwatch, because I like what he had to say about your photo. Peace, brother, keep up the great work (which I know is just you being you). Thanks, too for the email response to me yesterday email.

Wonderful image and story, Ralph. The way only you can share it. You have a great soul.

He has a good face and beautiful eyes.

Way2Go Ralph ! I saw this first thing this AM but didn't get a chance to comment but what went through my mind was "Ahhh Michael...I remember this wonderful face!" Beautiful Ralph...congratulations on spotlight award but you should be spotlight pretty much every day anyway in my opinion...Congrats!

Oh, Ralph, I'm delighted to see Michael made it to the Spotlight! Congratulations ... and now you'll have to tell him he was "published."

Wow! Congratulation on the spotlight!

This is a Man. When I've looked into his eyes and said Hello, he always answers back. And truly means it. Learn.
Much love for this photo. A Detroit Icon.

Wow ...extraordinary ! A superb portrait where his kindness appears ! Congratulations !

Feels great to see Micheal's face on a Spotlight . Congrats to both of you ;)

Dropping by to offer you congrats on the Spotlight. Well deserved for this great portrait.

congratulation !! it's a beautiful picture !

WoW!!! Super portrait the eyes look kind, the face looks as though he's seen more than most of us can imagine

Punit from Somewhere in, India

Fantastic portrait here..! I love that line " Most people look at Michael but few really see him, or perhaps they would prefer not to see him." - many things within our cities are like that - we look at them but don't see them. Glad to "see" them through your eyes, your photos.

Great and very nice portrait. Congrats to the spotlight

sorry to have missed this fantastic spotlight!
beautiful light on his eyes!

That's a beautiful portrait with a lot of soul. Michael is certainly a character by himself, but you have your part in this successful portrait. The sharpness is excellent, with a good variety of textures ( hair, skin, sweat on the face) . The colors are good too. Congratulations.

This image has been featured in 2 Remix collections.

People & Portraits... by Judy aka L@dybug

My favorites on AM3 - PEOPLE by Maria