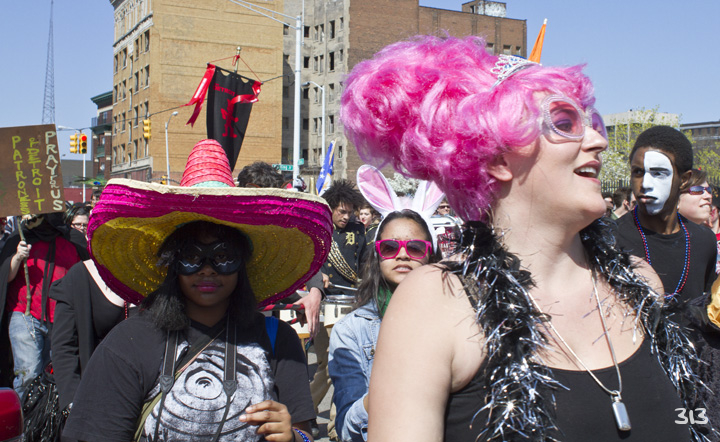 Previous Next
← previous day next day →

There are rumors that he is responsible for the fire of 1805, the race riots of 1967, the hiring of Matt Millen in 2001, the Kwame Kilpatrick text message scandal of 2008, and the financial crisis of 2012. The he that I am referring to is du Nain Rouge, a red dwarf who has cursed the City of Detroit well over 300 years, after being attacked by Antoine de la Mothe Cadillac, the founder of Detroit. Throughout the centuries the good citizens of Detroit have banded together and marched the evil Nain Rouge out of our fair city. On Sunday the 25th of March 2012, Detroiters again banished that evil little harbinger of doom, du Nain Rouge!

These have been superb street documentaries, Ralph - fantastic!

I'm enjoying this series, Ralph : thanks for sharing it. I had no clue about this harbinger of doom. (though I can now believe he came down the 401 in 1967 and laid a big FAT curse on our pathetic Maple Leafs!)

@Rick: I feel your pain, I lived though an 0-16 Lions season, wore my little Lions cap everyday trying to show my support, like that would help...

They seem to be enjoying themselves tremendously! Nicely captured Ralph! ;-)

Lots of reasons to gather together for a parade ... good shot, Ralph!